Heaven and Hell. From magic carpets to drones.

Boghossian Foundation – Villa Empain
Centre for art and dialogue between the cultures of the East and the West
Brussels, Belgium

“The traditional garden of the Persians was a sacred place designed to bring together within its rectangle four parts representing the four parts of the world, with an area in the middle even more sacred than the others, which was like the umbilicus, the world’s navel (this was where the basin and the fountain were); and all the garden’s vegetation had to be distributed in this area, in this kind of microcosm. As for the carpets, they were originally reproductions of gardens. The garden is a carpet where the whole world achieves its symbolic perfection, and the carpet is a sort of garden moving through space. The garden is the smallest parcel of the world, it is the totality of the world”.
Michel Foucault

The magic carpet has long been a symbolic way of travelling around the world. In Persian mythology, King Solomon had a magic carpet. The Queen of Sheba, who was said to be a magician, allegedly offered him this fabulous gift. It is even said that the king could transport his whole palace on it…
The magic carpet referred to in tales was popularized by One Thousand and One Nights, and has also been depicted in many fantasy films.
Some scientists have focused on this legendary object, seeing therein an aerial replica of the way the manta ray moves in water. Physicists have even become involved in research to make a carpet fly!

But the magic—flying—carpet also conjures up that ancestral dream, of flying like a bird. After Icarus, the first man to soar up into the air, Leonardo da Vinci became caught up in designing highly ingenious flying objects.
Since then, flying saucers have haunted the modern imagination, well beyond all the technical performances which have really enabled people to travel through the air, and launch a very diverse selection of flying machines.
At the present time, our minds are occupied by drones: as remote-controlled flying machines, drones open a whole new realm of possibilities. From observation to control, transporting objects to weapons, nothing seems to be able to escape from the promise of their performances. For better or for worse…

The exhibition Heaven and Hell broaches the theme of flying machines and flying carpets according to a variation of artistic interpretations: the symbolism of ancient carpets and its inspiration: the geometry of gardens, the ancestral dream of being able to fly and flying objects, the world seen from above, the occupation of space by satellites, the worldwide expansion of drones and its consequences. 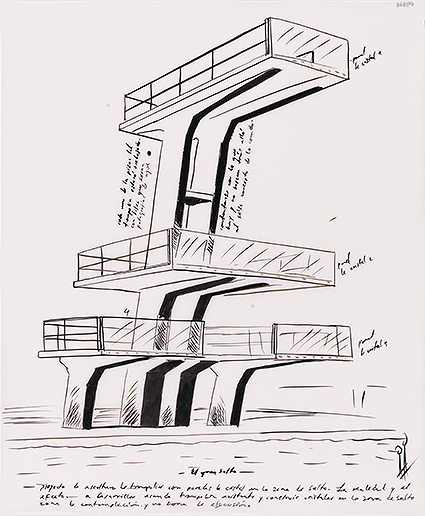